Transfer season is nearly upon us. This week The Athletic linked Declan Rice with a move to Manchester United. I asked “What’s Declan Rice like according to a West ham fan”.

Declan Rice has been a revelation for West Ham since his debut in the 2016/17 season during West Ham’s 2-1 Premier League win at Burnley.

The midfielder has established himself as one of the defensive midfielders in the league. Rice has become the lynch-pin of David Moyes’s West Ham side, where the club are battling for Europe this season. At 21 years old, Rice has solidified his status as not only one of the best ball-winners in Europe, but as a leader and West Ham. captain

Former Chelsea manager Lampard was an admirer of the player as is Manchester manager Ole Gunnar Solskjaer. A swap deal for Jesse Lingard has been touted as a possibility for the Old Trafford club.

RIce is seen as a long term replacement for the Serbian Nemanja Matic and would give the Manchester club a boost in an area they lack.

Rice according to a West Ham fan

Marc Ryan an an Irish West Ham fan gave me a few insights into Rice as a player if he decided to make the move.

Conor: How much off a loss to west ham would he be ?

Marc: A big loss in the run in , but have a feeling he be back for last 4 matches.

How do you see him as an Irish west ham fan ?

Marc: It’s so tough as a republican he embarrassed me as a west ham Irish fan. I honestly don’t care if he leaves and will laugh at other west ham fans when he does when they cry about loyalty and laughed at us Irish when he walked out.

Conor: Why should fans of a team who get rice be excited?

Marc: He’s phenomenal I mean it I never seen an academy player breeze into first 11 so easy. He’s quality and he will get better he’s a gem.

Conor: What’s his best moment in a West ham shirt?

Marc :This season every game we are in top 4 due to this . He’s one of our top 3 players still have soucek above him.

In other news this week Declan Rice is set to miss he rest of the season after the midfielder suffered an injury during England’s European qualifiers last week. West Ham are hopeful Rice will be out for a maximum of six weeks, but other sources have said the best-case scenario is Rice will only miss three weeks. 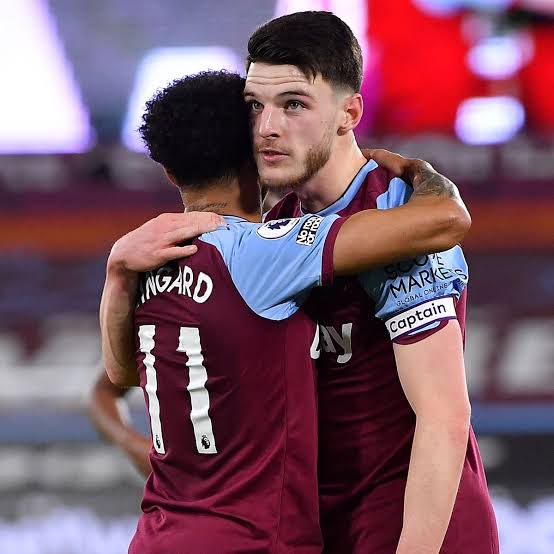 Tobin Heath has agreed personal terms with Arsenal. The two-time World Cup winner is an Arsenal fan, is available for free after leaving Manchester United earlier this summer. The Gunners have acted quickly to sign […]

Rooney has his say on Ronaldo move to City

Former Manchester United legend Wayne rooney has weighed in on the Ronaldo potential move to arch rivals Manchester CIty. Rooney played with Ronaldo for 6 years and won a Champions League along side the flying […]

Sancho to Manchester United gets the biggest hint

Jadon Sancho to Manchester United seems to have received it’s biggest indication it’s happening last night. The agency that represents Marcus Rashford  D N May sports management replied to a fan on twitter about the […]