Jurgen Klopp’s side created waves of attacks from the first whistle, and go their deserved opener after a cross from Trent Alexander-Arnold deflected off former Chelsea defender Fikayo Tomori and into his own net.

The hosts could’ve doubled their lead with a penalty courtesy of a handball by Simon Kjaer, but Salah’s spot-kick was saved by Milan keeper Mike Maignan. Milan now had the momentum in the game and unbelievably took the lead within a matter of seconds just before halftime, with the goals coming from Ante Rebic and Brahim Diaz.

Liverpool regrouped during the interval and were able to put Milan under intense pressure once again, they were rewarded for their efforts after Divock Origi superbly set up Salah who was able to convert and level the game, making up for his missed penalty in the first half.

As the game went on, the attacks were only heading in one direction, at AC Milan’s goal. With captain Jordan Henderson completing the turnaround in the 69th minute with an amazing rifled shot from just outside the box following a partially cleared corner. Putting to bed a thoroughly entertaining Champions League opener in Group B. 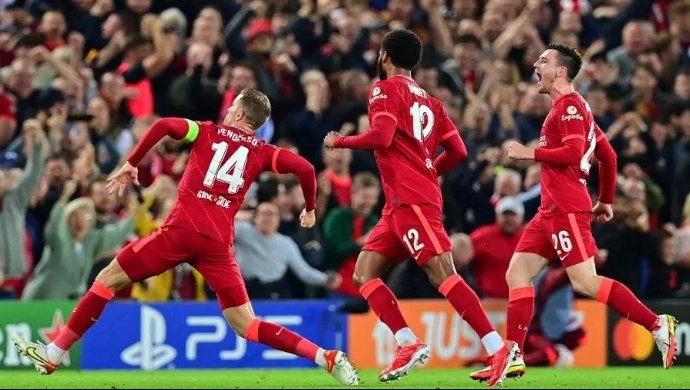 Klopp’s team managed to somehow look very comfortable and dominant in the early stages of the game, to suddenly looking nervous and tense despite being to outplay Milan for the majority of the match.

When they got their opening goal, it appeared that they might have the game wrapped up by halftime as the hosts created numerous chances to extend their lead and put the game to bed.

But when Salah missed the opportunity to double their advantage with his spot-kick, it gave the away side a bit of momentum as the game was approaching halftime. AC Milan were able to stun Anfield into silence with two quickfire goals partially thanks to the defensive frailties of the Liverpool backline.

AC Milan have completely turned this game around! 🤯

Despite Liverpool dominating the first half, Ante Rebic and Brahim Díaz have put the visitors ahead…

One minute and 48 seconds between the two goals! 😳 pic.twitter.com/4WKUzIgn9A

AC Milan have been in the wilderness as it were from the Champions League for a number of years. For one reason or another, they’ve been unable to make it back into the prestigious European competition and looked set to be a team from yesteryear in Champions League history.

However, after a brilliant campaign last season which saw them challenge for the Serie A title, ultimately losing out to rivals Inter, they qualified for the Champions League for the first time in many years.

The historic club was back with Europe’s elite and was grouped with other great European teams like Athletico Madrid, FC Porto and Liverpool.

Liverpool were the first opponents for Milan, a historic fixture for both teams, and the two sides played out a thrilling opening Group B tie with the hosts dominating and the away side being lethal in front of goal when it mattered.

Eventually losing the game with the pressure being too much for the Italian outfit.

Despite the loss, AC Milan manager Stefano Pioli will take some positives out of the performance at Anfield last night. They defended well for a lot of the game and were able to take the chances they had to scare Liverpool faithful enough to believe they could win the tie.

They’ll be hoping to be as lethal in their next fixture as they prove to the rest of Europe’s elite that they are back amongst the best teams on the continent.

Aston Villa ‘s Ollie Watkins has been linked to Liverpool in a blockbuster summer move today.

Real Madrid has beaten Liverpool 3-1 in the Champions League quarter-final first leg at the Estadio Alfredo Di Stefano.  A brace from Vinicius Junior and Marco Asensio’s goal give Zidane’s side a conformable advantage going […]